Have you ever been so lazy at naming something that you probably just opened up a book and chose the first word that your eyes fell on? Well, the earliest residents of Arizona seem to fall under the same category. Either that; or they are really, really bad at creativity.

Some of the names of places and towns in the Copper state are so ridiculously weird that makes you really question what went on in the minds of the name givers. Here are some of the most unusual names in the state of Arizona. 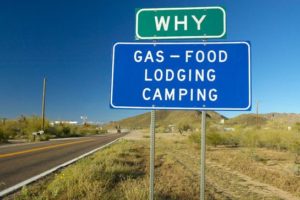 You will rarely find a place whose name and people’s reaction to the name looks absolutely the same, but here we are. The town legend says it comes from the ‘Y’ shape formed by the intersection of State Route 85 and State Route 86 and the fact that USA’s postal service needed at least three letters to deliver mail to a place – so instead of wasting precious time choosing a name that made sense, they went with ‘Why’. And we thought we were the one to invent SMS language.

Never will you find a place more aptly named than this. Nothing was nothing before 1977 when it was taken up as a project to make something out of nothing and if someone is wondering what the place was officially called – NOTHING. No doubt that it was abandoned in the 2000s.

Santa in the signboard. Maybe the reindeers are here too.

A real estate agent once had the weird idea of turning an empty site into a resort town where there will be Santa Clauses all over, both living and stationary, and kids would finally get to send letters to real life Santa Clauses. But it turned out to be as futile as the story of Santa Claus once you grow up.

Perhaps the biggest city on the list with an estimate of 133,000 population, the story behind its name is indeed very surprising. As it appears, Flora Mae Statler was sure she would be ‘surprised’ if the town turned out to be any good for living and working, but it did and so without much ado they literally put her assumed emotion as the town name. Whether that was lack of imagination or a comeback, one will never know.

The name is sure weird, but it makes more sense than the others on this list. The almost abandoned town has around 180-200 people and a history of silver chloride mining in the nearby hills – from where the name of the town comes. Legit, you might say; but then the entire state of Arizona will become a periodic table.

If you are wondering why I have suddenly jumped to Iraq of all places, do not worry; because I have not. This place in Arizona has such a pathetic excuse for a legend behind its origin that you cannot even let it pass as a legend. Apparently, while mining for copper, a son once asked his father a sack for keeping the collected copper and went – ‘Do you have a bad, dad?’ Told you, it is pathetic.

Read more on creepy things in Arizona as well.

The Arizona State Fair Hosted The Good, The Bad And The Tasty Food 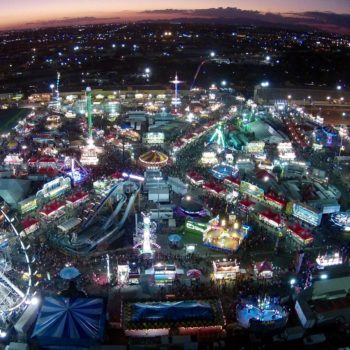