Blaine Long, a former contestant on the Voice, recalled what it was like being on the show. His run on the show did not go quite as well as he had planned but he did not let that bring him down.

He talked about the audition and said that tougher than the blind audition was the audition that was held before the blind audition off the television. He revealed that it was only when the show was in full flow that people would realize exactly how stressful it was as no one told them anything before that. They went in not knowing what to expect as it was not shown on television either.

“The audition before the blind audition is very hard, that’s very stressful. They don’t tell you until you are really thrown into the whole process of the show.” 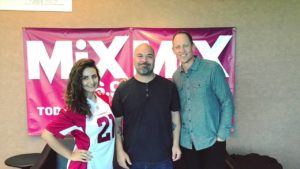 Blaine Long live at a studio.

The audition literally came out of nowhere for him though, as he had been playing a CD at Orpheum, Phoenix where it was recorded unbeknownst to him, and handed to a producer of The Voice.

“The producer set up a private audience from my performance at the Orpheum,” he said. “I didn’t think anything of it. I thought this was a part of pushing the album I just did with Grant.”

It was after this that he got the six-day long audition for the executives, before finally getting selected to appear on the Blind Auditions.

Long had a tough decision to make at the Blind Auditions as well. His chosen mentor, Alicia Keys, had not turned but all the other three had. Faced with the tough decision, he chose Blake Shelton instead of Adam Levine and Miley Cyrus. He admitted that it felt cool for all three to have chosen him. He went on to talk about why he chose Blake. In a scene that was edited out of the actual show, Blake had told him that he would advocate for Long to be an original artist. He had always covered songs, but he wanted to sing songs of his own, and Blake’s words were literally music to his ears.

“I will be an advocate for you as an original artist,” Long recalled Shelton telling him. “That was the reason why I chose him. The whole Nashville thing is not my vibe necessarily. I don’t consider myself a country artist.”

A whole year after The Voice experience, Blaine Long released his first album ‘Scorpio.’ He talked about the experience in an interview:

“And then, making the record, you realize that you want to try to set the record straight on… I call it a musical “Price is Right.” I just made it onto a show. That’s all it was, but to a lot of people, now I’m a “Voice” singer. And a Blake guy. So I was fighting against some of that and going with some of it.”

He explained having to sing on The Voice without even knowing the song in the Battle Round, while everyone else knew it. He said that it was ‘awkward’ for him to be on the Voice and he felt that it was not for an artist like him. But he got an experience, which is always welcome.